Any religion needs to be considered within it's context of time and space. Islam being one of the later Abrahamic religions, it inherits a fair bit from a number of religions in the region. The diagram below shows some of these influences.

As Muslims, we cultivated a broad and deep knowledge of history and philosophy, read widely and came to realise there is very little original or unique in Islam, and that it is merely a product of 7th century Arabia (Mohammad died in 632 AD) which incorporates vast amounts of detail from everything that had been before. Claims of divine inspiration, divine intervention, miracles etc are clearly unsubstantiated and based on earlier myths.

The hadith collections were largely constructed ~200 years after the death of Mohammad, and the collectors were based in Persia ... which was largely Zoroastrian just prior to that. Unsurprisingly then, the hadith and some key elements of Islamic practice have a significant Zoroastrian influence.

English translations of most of these books noted in the diagram below are available in electronic format at low / no cost (with the exception of the Ginz Rba). On reading them it's impossible not to be struck by a feeling of deja vu in places. For example; details like the age of Noah trickle through from one source to the next. Quran 29:14 notes 950 years for Nuh, as does Genesis 9:28, but these need to be read in the context of the Sumerian King List and the Epic of Gilgamesh. Another example is the As-Sirat (narrow bridge which souls must cross) noted in Bukhari Vol 1, Bk 12, 770 which has close similarities with the Chinvat bridge of the Arda Viraf. The Arda Viraf is also the likely inspiration for many hadith about Jahannam (hell) and the punishments that await. Another example is Mishnah Sanhedrin 4:5 which is pretty much replicated in Quran 5:32. 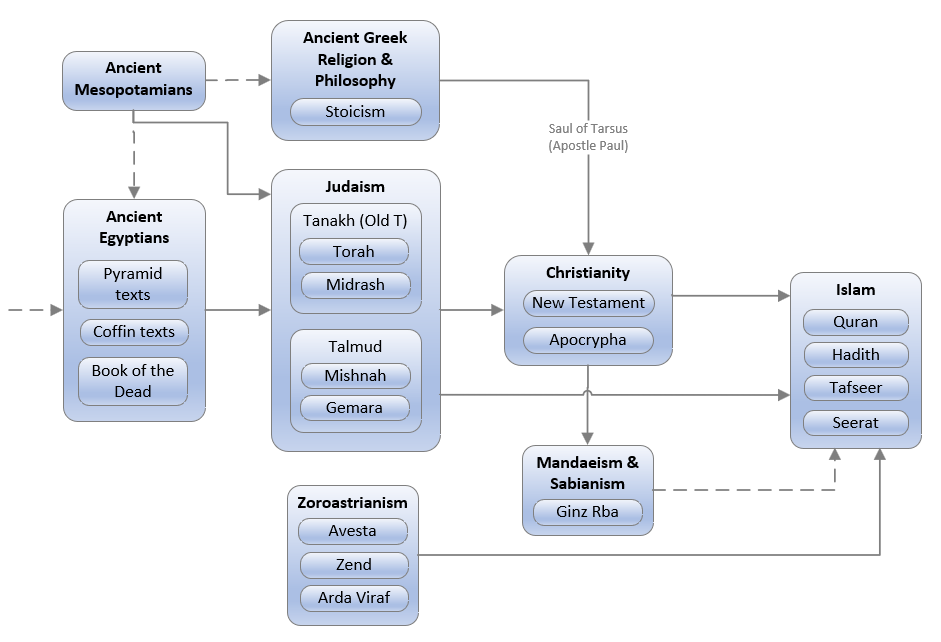